This tutorial looks at how to create time by understanding ‘timing and the three elements’. The video below demonstrates how moving creates more time for us to catch the nunchaku mid-air than if we were to remain static. If we remain static and the nunchaku are moving our hands have to work harder to get to where they should be to make the catch. If we are prepared to move our bodies in time with the movement of the nunchaku then once the nunchaku are airborne we actually have more time to make the catch. Can you imagine a fielder on a cricket field who couldn’t run? He wouldn’t make many catches.

END_OF_DOCUMENT_TOKEN_TO_BE_REPLACED

As anyone who has ever talked to me about martial arts and kobudo will know my mantra is always the same; flow like water, be sensitive, feel more and work with the forces around you for best results. That’s all very well but is that really how we progress in any discipline? Do we just sit down, meditate, use feeling and the whole training process will happen by itself? Of course not!

Let’s get something straight. There is no such thing as plain sailing in the pursuit of excellence, regardless of the discipline. Hard work is always necessary. For example, I was trawling the internet recently for snack foods that would make me feel full without putting the pounds on. The first article I came across declared that while some foods are better than others, we need to accept that if we are serious about changing our eating habits to lose weight we have to accept some feelings of hunger will be necessary. I’m not a food expert so I am not getting into a debate about how accurate that particular author’s point of view is – but it is certainly true with most things that ‘you get out what you put in’. Hard work and effort bring the best results. END_OF_DOCUMENT_TOKEN_TO_BE_REPLACED 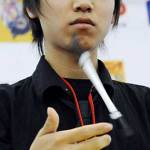 Who has not picked up a pen and tossed it in the air only to catch it moments later after it has spun once or twice? If you haven’t done this yourself, you will have witnessed somebody else doing it or even been disturbed at a public gathering when somebody else has dropped the pen they were playing with. What are they actually doing there? Well, firstly they have to weigh up the pen; that means assessing its weight and weight distribution. From there, they get an idea of how much force will be required to throw it up in the air, and they can estimate how much turning force is required to make it spin in the air. They don’t work that out in a lecture theatre or with a pen and paper. The maths would be horrendous, I am sure, but the human mind and body working in harmony together can just intuit such things in a blink of an eye. END_OF_DOCUMENT_TOKEN_TO_BE_REPLACED