The “Frenchman” is back. Once “The Devil”, he is now “The Fighting Preacher”

When you meet this man either in person or online you can’t miss him. Towering well over 6′, he has a strong physical presence that has proven overpowering for those that have fought him…or crossed him. As a writer, he is never short of opinions and ideas. He has worn many interesting hats and has been in the limelight for the right and wrong reasons but what made me relish this particular interview was that he has something that many people lack: whatever he is going to do, he commits to it totally and that goal becomes his raison d’etre. He also happens to be an awesome martial artist.

When did you first embark on your martial arts journey and what prompted it? Where did the inspiration come from?

The early 1970s saw Bruce Lee exploding on the popular culture scene. He was, still is and always will be a martial arts inspiration to all. I hung around with older boys who attended Liverpool Shaolin Karate Club (LSKC). I was 15 and I joined just to be with my mates because I really wanted to box but found I had a natural ability for Karate.

What were the highs and lows of your martial arts career?

The most extreme high was being Crowned World Champion in 1985 at The Wembley Conference Centre. Worlds All-styles Kickboxing Organisation.(WAKO)

The most extreme low was the passing of my Sensei in February of this year. This was the greatest man to ever encourage greatness in me. He made me believe I could be a world beater and he became “pops” to me. 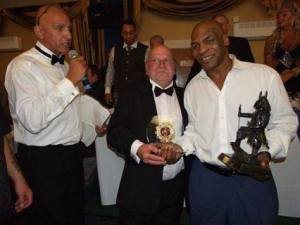 As a Kizuna Knight and member of the Kizuna Brotherhood, I and my fellow knights have been entrusted with the preservation of our master’s legacy and I was fortunate enough to receive my master’s samurai sword. 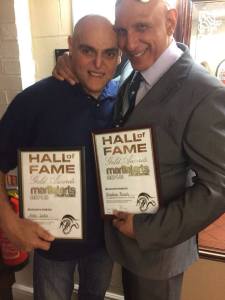 Stephen next to his fellow Kizuna Knight and Hall of Fame member, the legendary Alfie Lewis.

Through the Kizuna fellowship and The World KuboKan Federation (WKF) he will remain apart of our continued journey.

How do you think your martial arts training has affected you as a person and in your career?

This is a difficult question to answer because I have been learning, teaching and studying Martial Arts for just under 40 years from a boy of 15.

For me, it is not a sport, nor is it a hobbie or pastime. It is a way of life and I am “Bound by Budo”. Budo is a warriors code, a set of principals that dictate the way individuals conduct themselves in any given situation. It is the code of the samurai. 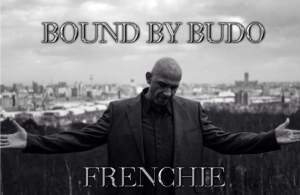 It governs the way I walk talk and think. Let me be a bit more specific. I am 55 I have the body and appearance of a much younger man and a lot of this is to do with the good posture my art has taught me.

I can alter my mood by practicing the breathing exercises I have been taught. This is something people usually associate with yoga not karate.

My career? I have had two careers: one as a so called “gangster” and I was given the name of “The Devil”.

This is not really the medium to discuss that part of my life but I do not hide my past. I have written a book on it.

Suffice to say the physical skills I learnt along a ferocious Japanese mindset made me infamous. Suspend your views on the morality of my activities as a tax man – would Stephen “The Devil” French been so formidable or even existed without martial arts. The simple answer is no.

My second legitimate career as a Security Boss saw me employing 500 men and the impact of my martial experiences is what made that business so successful. How?

My martial arts tuition; and not the physical kicking and punching, but being under the tutorage of Ronnie Colwell and the psychological perspective he helped me develop and hone.

This gave me the confidence to build a multi-million pound turnover business with 500 employees looking to my lead.

Would I have been there without my martial arts? The simple answer is no, I would not.

I have a property portfolio, both domestic and international; these day quite modest but I combine my rental income with my Commercial Recovery business and I do okay.

We all have a past and yours has been documented many times on TV. Having been involved in violence in the past, what would you like to say to people about your attitude to violence, and what is the best self-defence tip you can give readers about how to remain safe from violence?

We all have a past and again it is a difficult question to answer in a short space of time, so I will be as succinct as I can.

There are socioeconomic and geopolitical factors combined with issues of race and race discrimination and endemic deprivation that I could outline, that saw the first generation of British-born black people criminalised, alienated and socially abandoned. This led me to be a very angry young black man but then I would be told that I had a “chip on my shoulder”

“I was not born a criminal but I was criminalised by the time I was 10 years old, and fitted up by bent copper for stealing a car.”

Now if you know me or have read my book or seen me on TV, you will see a guy who is not afraid to tell the truth – and I was criminalised so I became a criminal and I was ruthless. That’s the truth!

Growing up in 1970s UK for a black man was a war zone and especially in my beloved city at that time. Liverpool was the most racist city in Europe with the most racist police force – NOT my word but the words of Lord Gifford. See The Gifford Report and White Paper.

So violence was all around me all the time, even in my own home. I was beaten so hard and so many times that I became desensitised and extremely violent myself. It was a way of life in the ghetto.

My martial arts ‘professionalised’ my violence. I was a young man raging at the unfairness that I was born into and I decided I was going to smash out of it by any means necessary.

“The leaders of the world are fully aware that violence works when they wish to impose their perspective on others who resist them. Is this right or fair?”

We are taught in the main stream that violence against others is wrong and that it does not solve anything.

It an interesting perspective but the UK, and particularly USA and their foreign policy, have us on the brink of total destruction by the extreme violence of war.

Under the banner of peace, they blow to smithereens any philosophy that disagrees with theirs. As an individual you would be given triple life sentences for the activities they carry out.

So the leaders of the world are fully aware that violence works when they wish to impose their perspective on others who resist them. Is this right or fair? No it’s not but it just keeps on going on.

I have a complete understanding of violence on a individualistic level and I was taught the difference between right and wrong…so when I attacked somebody to steal their drug money I was fully aware that I was in the wrong but I made that choice and I own it to this day.

Proactive violence is a choice. Somebody is really angry and makes the decision to punch the cause of their anger on the nose. This is a choice.

Reactive violence is not a choice. Somebody decides to punch you in face (pro active violence) so you are forced to either capitulate or retaliate.

This is a simplified description. It is a lot more complex than that and it is important to remember that violence on the interpersonal level has a scale from raised voices to the extreme violence of brutally taking of a life.

What is my best self defensive tip and how you remain safe from violence is the second half of your question.

I could be a smarty pants and say walk away but I have been in situations were that’s not an option.

I am of the opinion, and I ask nobody to agree with me on this – it just my opinion – that you can NEVER be 100% safe from violence.

The prevalence of violence is everywhere. Even in your car with doors locked you could innocently cut somebody up and the nutter rams you off the road or follows you for miles on your bumper. Everybody who’s been driving has met that guy.

Therefore I am of the opinion that for your whole life you MAY never suffer a violent incident but you are never 100% safe from violence.

“COAST TO SAFETY – for people who wish to avoid violence at all costs.”

It is a mindset, using the principals of COAST. This comes from a driving acronym I have adapted and called “COAST TO SAFETY”. This for people who wish to avoid the violence of a fight at all costs.

That my best self-defence tip because it avoids violence at all cost. It may seem a bit severe and overly-cautious but it is worth taking on board. Our prison are full if guys who punched the drunk who fell down, hit his head and died – and they got 8 years for manslaughter. By then it’s too late to COAST TO SAFTY

Thanks very much, Stephen

Thanks for taking part in this interview, Stephen. Your answers are thorough, candid and thought provoking.